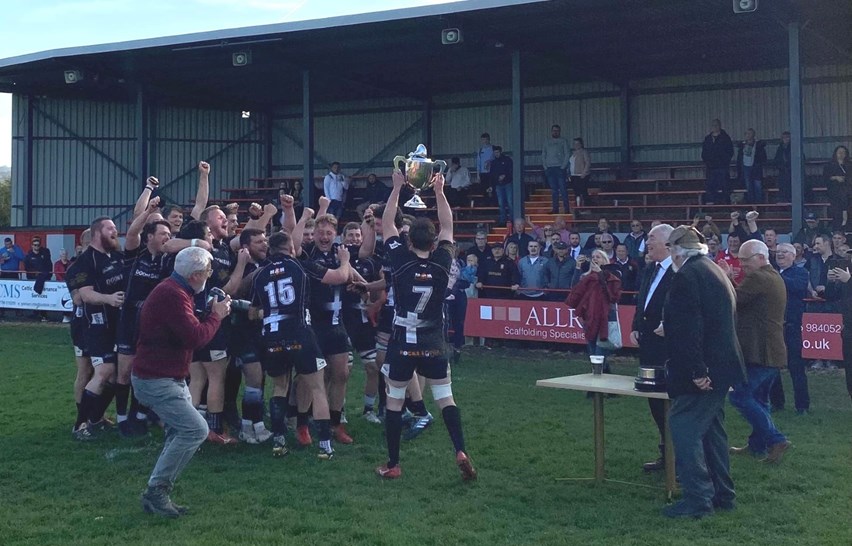 Can't put this report in usual place as not a league game - but that's a great opportunity to make sure everyone can see Goldy's great game reporting (as well as coaching). Please read the report and see why - The Cornish All Blacks are once again holding the Cornwall Cup

A brilliant advertisement for Cornish rugby played out in front of a decent sized crowd at Redruth's Recreation ground, and eventually the higher placed league team came out on top - with a bit of Sir Alex's famous 'squeaky bum time' thrown in for good measure as well! The key areas of focus, for the CABs, were to attack the St Austell scrum and send power runners down the vulnerable channel of scrum/lineout and first defender. On the defensive side of things it was to defend the St Austell lineout by matching up and challenge in the correct spots and to be very aware that the St Austell playmakers would use a range of kicking options to try and get through the CABs defence and midfield.

Playing up the slope, away from Hellfire Corner, the CABs took an early 3-0 lead via one of those vulnerable channels with player-coach Ryan Westren charging through leading to St Austell infringing at the subsequent breakdown. It was then that the pattern of the first half took hold; some frustrating penalties (lazy runners and illegal competing at the breakdown) enabled St Austell to keep kicking to the touchline and gaining some excellent ball (predominantly through Mark Vyan and the lineout calling of Kyle Marriott) - which wasn't helped by the CABs not matching up in the appropriate spots. A series of infringements and some sharp back play enabled St Austell to take a 7-3 lead (through solid run from Ben Plummer and offload to the supporting Matt Shepherd). The pressure, that St Austell put on, was cranking up and desperate defence and continued infringements (mainly at lineout maul and defence) resulted in the CABs being reduced to 13 men and now it was proper squeaky bum time as the CABs were doing everything to hold the St Austell attack out and St Austell trying to get that all important score and stretch the lead. This was the crucial period of the game and probably showed the difference between the two leagues; CABs had been exposed to attacks like this and were able to use their little extra bit of nous, physicality and fitness to slow the ball down enough and also cover those extra yards and spaces that need filling, whereas St Austell would have been used to scoring one or two tries in that period against opposition in their league. Half-time and the game was perfectly poised 10-6 to St Austell with St Austell not profiting much from the power play they had.

The discussion was focused on matching their lineout better and then being patient (not playing Barbarian/Hollywood style rugby), keeping the ball and waiting for either St Austell to infringe or gaps to appear and also making full use of the lnfamous Hellfire Corner slope. CABs knew that their own set piece was working and that would give them a chance to build. A couple of early penalties left the score at 13-9 with about 30 to play, the CABs were at full complement and it was now the CABs turn to crank the pressure up with a series of penalties and set piece power plays which resulted in Fred Bulut being driven over from a lineout and then some close drives and power runs, enabled the returning George Bone to dive over and now there was a bit of daylight, on the scoreboard, and more importantly a noticeable shift in body language between the two teams; one team now had a spring in their step and the other was beginning to look resigned. Now the scene was set for the CABs to let loose and some wonderful back play and interchanges resulted in Dan Pearce and Jack Statton to cross the line and extend the lead to 35-16 with a few minutes to play. A late catch and drive allowed St Austell to claw the scoreboard back, but not enough and 60 seconds later referee, Olly Parsons, blew the final whistle and the CABs could properly celebrate a County Cup win for the first time in 15 plus years! 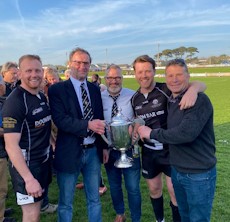 St Austell demonstrated that they have all the attributes for surviving in the 'new' SW Premier if they are successful next weekend, against Devonport and we genuinely hope for Cornish rugby that they are successful. For the CABs it is a small matter of hosting SW Premier champions-elect, Exeter University, at Polson Bridge. We really hope a large Polson crowd can come down, see the Cornwall Cup (have their pic taken with it) and cheer the boys on for their last game, before a very well earned rest and summer

Man of the Match - Dan Pearce 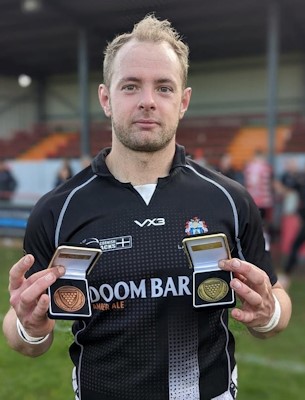