The Cornish All Blacks Supporters Club otherwise known as the Black Pack was formed by Malcolm Bird in 2007 when the club was promoted to what is now the Championship as a way of providing a forum for supporters and for organising coach trips to away matches.

Trips had been organised  before, notably to Sedgeley Park for the play off match after our first season in what is now National 2 South when we finished 2nd behind Plymouth Albion and above Cornish Pirates. When we reached the heady heights of the Championship we caught up with Albion and the Pirates again and also had to play Exeter Chiefs and Northampton Saints who had been relegated from the Premiership the previous season but still boasted several internationals. The highlight of the season was two coach  trips to Franklin’s Gardens as the pitch at Polson was declared unplayable for our home game after Northampton had arrived and they offered us a lot of money to play the rearranged fixture at Northampton so that more spectators could attend.

With more money coming into the game at the top levels and league changes including more matches being played at clubs nearer home, most spectators have preferred to travel away by car. However the growth of email has been important in keeping  Black Pack members informed about what is going on at the club and particularly the CABs.

One innovation that has continued is a “Meet the coaches and players” evening at the end of pre-season when the coaches outline their plans for the season and introduce any new players to the supporters.

The Black Pack subscription is still only £10 per season (although some members choose to pay more) which goes to sponsor a player or players for the following season. Membership also entitles members to a discount of 5% off club merchandise.

Malcolm Bird is chairman of the Black Pack but if you would like to join please contact the secretary/treasurer Mike Warne at tmichaelwarne@btinternet.com or phone him on 01566 772701 or find him in the car park or at the back of the stand at most home matches. 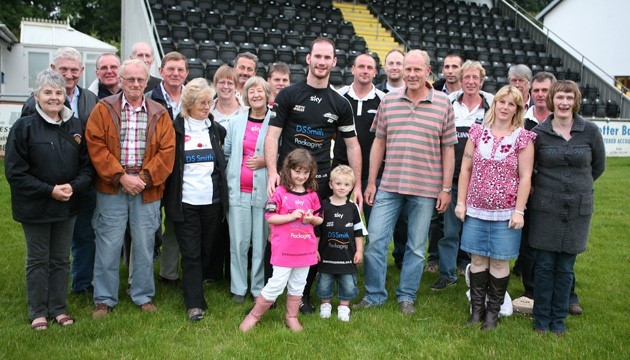 Some Black Pack members with the first ll Black they sponsored - Mike Rawlings..