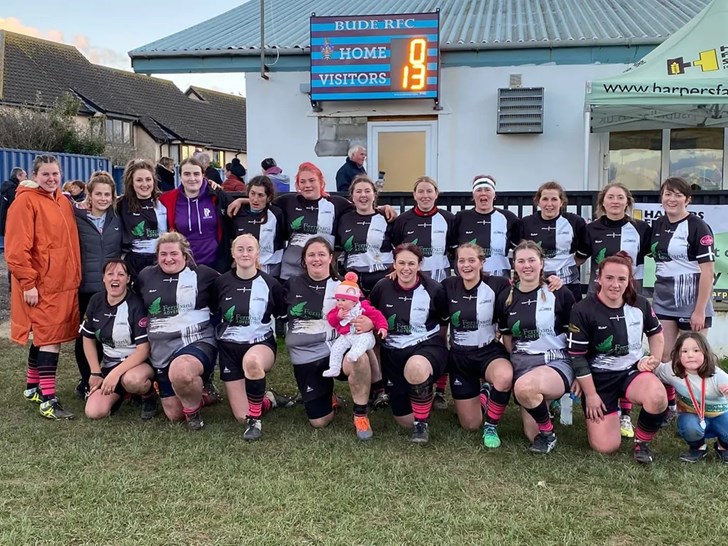 One of the big positives throughout the world of rugby in 2021 has been the continued growth of the women’s game. One team embodying that growth is Launceton Ladies.

Year-on-year, the take up of rugby by women and girls has been very positive and a number of clubs in England have grown their girl’s and women’s sections quickly of late.

When the pandemic arrived in the UK in early 2020 it put a bit of a spanner in the works, but in recent months clubs like the Sheffield Tigers, Chinnor Kites, Maidenhead Iron Maiden, Trafford MVWRUFC, Swanley Black Swans, Durham City RFC, Evesham RFC Cranleigh RFC, Yarnbury RFC and Cheltenham North have reported positive growth.

Another club on the up is Launceston Ladies who have entered a team into a league for the first time in 2021/22 and are heading into the winter break in top spot.

Set up in 2018, the Cornish outfit had to bide their time to take on competitive fixtures. The wait was worth it, though - since October they have won four from four completed games, added to by a walkover, to top the Women’s NC 2 South West (West) Division at Christmas-time.

The victories for captain Vicki Doidge and her team have come against Crediton Ladies, Bideford Ladies, Totnes Ladies and Bude Ladies and leaves the team feeling good heading into the new year.

Sarah Revers, who plays second-row for the team, does all their administration and is the membership secretary for the whole of Launceston RC, said:  “It has been a brilliant season so far, the team are really enjoying testing ourselves against some more established clubs in a competitive league.

“A few years ago my son played at the club so I was often down there with him and I started getting to know people and when I heard they were setting up a ladies section I thought ‘I’ll give it a go’.

“I had previously played at university and had enjoyed it, but had not played for a while, so when we had a couple of Inner Warrior sessions [an initiative by England Rugby to help the women’s game grow] I got involved and they were great.

“Looking back at photos from those sessions recently, what was really great to see is that quite a large number of us who were in attendance are now playing for the team.

“In those early days we had a real mix between some players who had previously played to some extent to those who had never picked up a rugby ball before in their lives.

“We started to find our feet, build up good bonds as a group and then began playing a few friendlies. We lost those, but that was to be expected from a completely new squad and we learnt a lot from the experiences.

“You need games to get better and after those friendlies we felt like we were really rolling, we had 30 or so players at every training session and things were good - and then Covid hit.

“When we were able to get back to some sort of training after the first lockdown we were just trying to keep everything fun and the coaches who have been involved along the way must take a lot of credit for keeping numbers high.

“I am really excited to see what we can achieve moving forward, especially with the club having a great girl’s section too with youngsters coming through.”

Revers mentions that the coaches and Martyn Sandercock have been with the women’s team since the start while others have been part of the journey including Rhys Edwards, who only recently stepped down.

And Liz Armstrong has also been a massive driving force behind things.

“I set the girls section up at the club in 2015,” Armstrong states.

“At the time it was to help the young girls including my daughter who had played mini rugby with the boys and then wanted to continue their rugby.

“That section steadily grew before the pandemic came and, in the last year or so, the numbers have been growing once again and we have girls training at under-13, under-15 and under-18 levels each week.

“In 2018 I then decided to set-up Launceston Ladies alongside Martyn Sandercock who is a very well-known rugby figure in the local area and was really passionate about helping me get a senior section for women off the ground.

“Both Vicki Doidge and Sarah Revers were instrumental in getting the ladies section up and running too.

“At first it was a lot of mums from the mini section who were keen to get together and do something that incorporated fun and fitness and things just really grew from there.

“Before Covid we had 35 players and, after a drop, that has now built up to 34 again and it has been really exciting watching those involved coming together as a team, representing the club and doing well in the league.

“And, indeed, there is so much interest now that we are looking at starting up a second squad that will play more social rugby, so these are fantastic times.

“The overall club has also been right behind the girl’s section - and now the women’s section - right from the start and I think that is really positive and shows Launceston RC in a great light because rugby is a game for all and we certainly believe that here.”